Yong Chun is considered one of the treasures of southern style kung fu. Another one of these treasures is Hong Jia Quan aka Hung Gar Fist which is another style taught at the Chien Hong School of Kung Fu. Yong Chun which was developed for close quarters combat, utilizes both striking and grappling/trapping techniques to define its self defense theories.

There are many schools of Yong Chun Quan, with various lineages and legends that are based on Fujian Five Ancestors Yong Chun. This style represents a group of similar styles said to descend from the Fujian Shao-lin Si (or Small Forest Temple).

Our school structures its teachings in Mandarin Chinese language and in pinyin (a written form of Chinese), instead of the more commonly used Cantonese language. The reason for this is that our school’s main base is in Taiwan (Republic of China) and the primary language spoken there is Mandarin. Not all of our programs are Taiwan based, but they are all presented in pinyin, with the exception of our TACT/DART program. 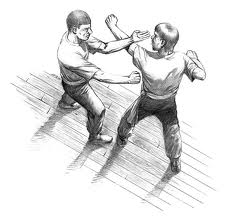 Yong Chun began its development within a 40 year time span. Many masters together with Ming generals, as well as Shao-lin monks and nuns practiced together to develop a “new” hybrid system with various concepts from their advanced styles. The masters came together to create this conglomerated style that was not only effective, direct, and simple, but also did not require too much time to learn it. Their purpose was the same as many rebels at that time: to teach their system to a secret rebellion army in order to overthrow the Qing imperials.

One of the most common legends talked about Yong Chun’s creation, which involves the young woman Yan, Yong Chun aka Yim, Wing Chun (Yong Chun aka Wing Chun literally means “forever springtime” or “praising spring”). At the time after the destruction of the Shao-lin temple and its associated temples by the Qing government, Yan, Yong chun rebuffs the local warlord’s proposal of marriage, and she says she’ll reconsider the proposal if he can beat her in a martial arts match. She soon crosses paths with a Buddhist nun–Wu Mei aka Ng Mui–who was one of the Shao-lin sect survivors, and asks the nun to teach her Shao-lin temple boxing. The legend goes that Wu Mei taught Yan, Yong Chun a new system of martial arts that had been inspired by Wu Mei’s observation of a confrontation between a snake and a crane. This style which was still nameless at the time enabled Yan to beat the warlord in a one-on-one match. Yan, Yong Chun there-after marries Liang, Bo Chou (aka Leung, Bac-chou) and teaches him the style, which is later named after her.

Since the system was developed during the Shao-lin and Ming resistance to the Qing dynasty, many legends about the creator of Yong Chun were spread in order to confuse enemies, including the story of Yan, Yong Chun. This perhaps explains why no one school of Yong Chun has the same story to explain its creator and origin.

The following is a summary of Duan Lun Di Yong Chun concepts and principles: